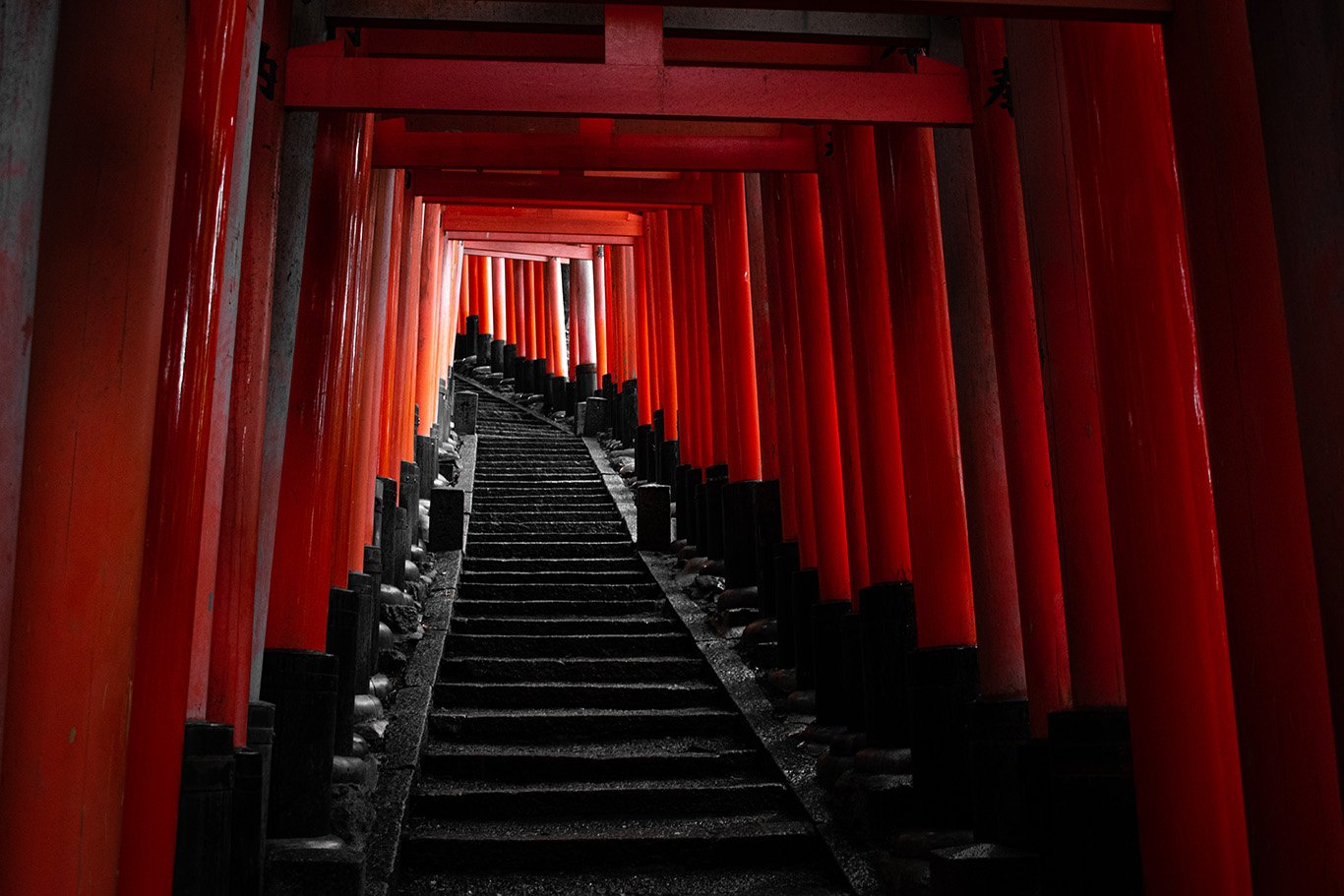 My name is Alden Obenita, and I am a master’s student of architecture in the University of Texas at Arlington. I’ve always found myself involved in art, drawing scenes from observation or creatures of fantasy. It was only until my later years of high school that I decided to pursue architecture, finding the crossover between art and the built environment a creative and engaging design challenge. Architecture is inherently spatial, which makes it all the more important for one to travel and experience it firsthand, rather than see it on a screen. Journeying outside your country broadens your views to other cultures, and lets you grow as an aspiring architect. Japan has a rich history of culture and tradition, which is why I chose to travel there for the 2019 Traveling Fellowship.
Light through Inari Shrine
Lone Temple
Guardian
Himeji Castle
Katsura Villa Detail
Curious
View Gallery

Japan is a country I have longed to visit. Stepping off the plane and onto the train platform, you immediately see the difference in culture. Train conductors go through each car, removing their hat and bowing before approaching each passenger and seeing their ticket. There is care and respect in every facet of their lives, and everyone is so polite. The journey to Osaka was smooth and quiet, in contrast to how fast we were going. It was late at night, and the streets were empty aside from the occasional businessman heading home from a long day at work, and we soon arrived at the hotel. Osaka was the perfect city to stay in for this trip, as it’s near the airport and several of the cities I’ll be visiting.
Photos with this owl costs less than $5
A larger shrine halfway to the summit
Gondolas on the moat
Stone lanterns line the paths of Nara
A view of Himeji within the castle
The famous pumpkin
Interior of Tenryuji Temple
View Gallery

Today’s plan was to visit Kyoto and its local shrines and temples. Getting up early, there were already staff cleaning the streets, and students were on their way to school in navy blue uniforms. Although it was only 6 in the morning, the workers at the nearby 711 greeted me enthusiastically, and I got a breakfast of onigiri and milk tea for under $5. Arriving in Kyoto after a short train ride, we first stopped at the Inari Shrine and its thousand vermillion gates. The cool mountain air and light rain were refreshing, adding to the spirit of the place, with the rising sun reflecting off the columns casting a soft scarlet glow. It was only an hour later that crowds of tourists arrived at the once quiet mountain, and we then moved on to the next destination, the Katsura Imperial Villa. The path to the villa itself was a labyrinth of houses, but the garden within the walls were organized and had an aura of serenity. While we weren’t allowed to enter the villa itself, the various tea houses were beautiful in their material and minimalism. The rest of the day was free of appointments, so we visited Toji Temple, with its pagoda and temple halls. The halls housed several Buddhist statues, with wooden guardians on their roofs to protect them. Temple grounds were maintained by uniformed monks, and although the pagoda was under maintenance, it was a peaceful space. We spent the remainder of the day at the district of Arashiyama, seeing the Tenryuji Temple, and a walk through the bamboo forest. After a curry meal served with ice cream, we headed back to the hotel.

There was so much more to see in Kyoto, but as we only had a week in Japan, we had to make use of our limited time and see the many other beautiful cities. We spent this day in Osaka, taking the train and seeing Osaka Castle. Even though we missed the season of blooming cherry blossoms, the path to the castle was not any less serene. Gondolas cross the moat carrying tourists, and we passed through many turrets and gates until finally reaching the main castle. Accented with gold and turquoise roofs, the fortress standing several stories tall overlooking the surrounding parks and waterways. The inside was renovated to house a museum, and unfortunately photos were prohibited. At the top floor was a balcony overlooking the city, and it was rewarding to see how far you’ve traveled from the entrance of the park to the view you see before you. After taking in the sights, we headed back to the station and made our way to the Shiba Ryotaro Memorial Museum by Tadao Ando. The museum was built next to the late author’s house, and houses an impressive collection of books and novels, with light flooding the library through filtered glass. The space celebrated the life of the author, and Ando monumentalized it beautifully. Unfortunately, photographs were prohibited here as well, but we’ll be seeing more of Ando’s work later. We returned that night and looked forward to Nara.

Buddhism has had a large influence on the city of Nara and, as such, has a large collection of temples. Nature is abundant, with many parks and trees populating the city, along with its most popular residents – deer. Leaving the station, there are several wandering the parks and sidewalks, with tourists taking photos and feeding them. The deer are gentle, and even bow their heads when you have crackers to feed them. Just be careful of antlers. We walked through Nara Park and reached Todaji Temple, housing Japan’s largest bronze Buddha statue, and was previously the world’s largest wooden building. Although it was only two thirds its original size, it was still an imposing structure. Burning incense as an offering before entering the temple, I entered, passing doors that stood several feet above me. We were greeted by the giant Buddha statue, the Daibutsu. Light shone off the aged bronze, with several others taking photos of the effigy. Other statues were also present, including a Nio – a fierce-looking statue of one of Buddha’s protectors. The rest of the day was spent exploring Nara’s several other temples, including Kasuga Taisha, a Shinto shrine famous for their lanterns. We then went to Isuien Garden, meaning “garden founded on water.” Like the Katsura Villa, several tea houses were scattered on the property, and a large pond was in the center with rivers splitting the garden in two. The sun was beginning to set, and we headed back to Osaka as lanterns began to be light the path.

Today we headed to Himeji. Surrounded by forests and mountains, it was a ways off compared to Kyoto and Nara from Osaka. Himeji Castle stood prominently over the city and was much more imposing, compared to Osaka’s. The path to the castle itself was across a narrow wooden bridge, and several large gates, all the while rising in elevation. The courtyards were contained by large walls and turrets, and yet the castle stood above everything. Unlike Osaka Castle, Himeji retained its original interiors, and going above several floors, there was a clear view of the entire city, including Mount Shosha which we’ll be visiting later in the day. Exiting the castle past crowds of tourists, we visited Kokoen Garden which was nearby. Like the other gardens we’ve visited, there was a tea house, open to a pond containing several koi fish and blooming flora. Leaving the garden, we took a bus ride to the base of Mount Shosha and took a cable car to reach its temples. A mist was setting in the mountain accompanied by light rain, emphasizing the already solemn atmosphere. Following the path, we reached the Maniden, a large wooden temple overlooking the wooded mountain, atop steep stone steps. Along the paths were smaller temples used by the monks inhabiting the mountain, and even here Buddha statues and stone lanterns stand duty by the narrow roads. Taking in the fresh mountain air one last time, we descended and headed back to Osaka.

On one of our final days, we traveled to the island of Naoshima, where the Chichu Museum by Tadao Ando is situated. The journey there was by far the longest, taking over an hour on the Shinkansen. Once on the small town of Uno, we took the ferry to Naoshima. The island had a relaxing, rural environment, and so we walked along the beach before continuing to the Chichu Museum. Built into the hillside itself, the museum had unique lighting conditions and courtyards, and is one of my favorite buildings by Ando. Unfortunately, photos were not allowed here as well, but that did not affect my enjoyment of experiencing its architecture and the works housed within by artists such as Monet and James Turrell. After purchasing some souvenirs, we took a bus to the Benesse House, also by Ando. There is a small café within where we had lunch, and we took in the view on the platform overlooking the rolling hills and beaches of the island. Going down the steps towards the beach, we found Naoshima’s iconic pumpkin, and took photos while it was still clear of other tourists. We soon had to leave to catch the last ferry leaving the island and returned to the hotel after a long day of travel.

We spent our last day in Japan’s capital city of Tokyo. The city was crowded and exuded a different kind of energy in contrast to the more rural side of the country. The day was spent shopping for souvenirs, stopping by Gundam Base, a mecca for fans of the franchise, and Akihabara. The city was so large, we did not even come close to covering half of what we sought to do in one day, and we returned to the hotel regretting we couldn’t stay for longer. For the short amount of time I spent in Japan, it was one of my most memorable experiences, and I’m thankful for the opportunity provided by the Architecture and Design Foundation to travel to the country not just as a sightseer, but as a student of architecture. I hope to return in the not too distant future and look forward to visiting many other countries.

LEARN MORE ABOUT OUR TRAVELING FELLOWSHIPS 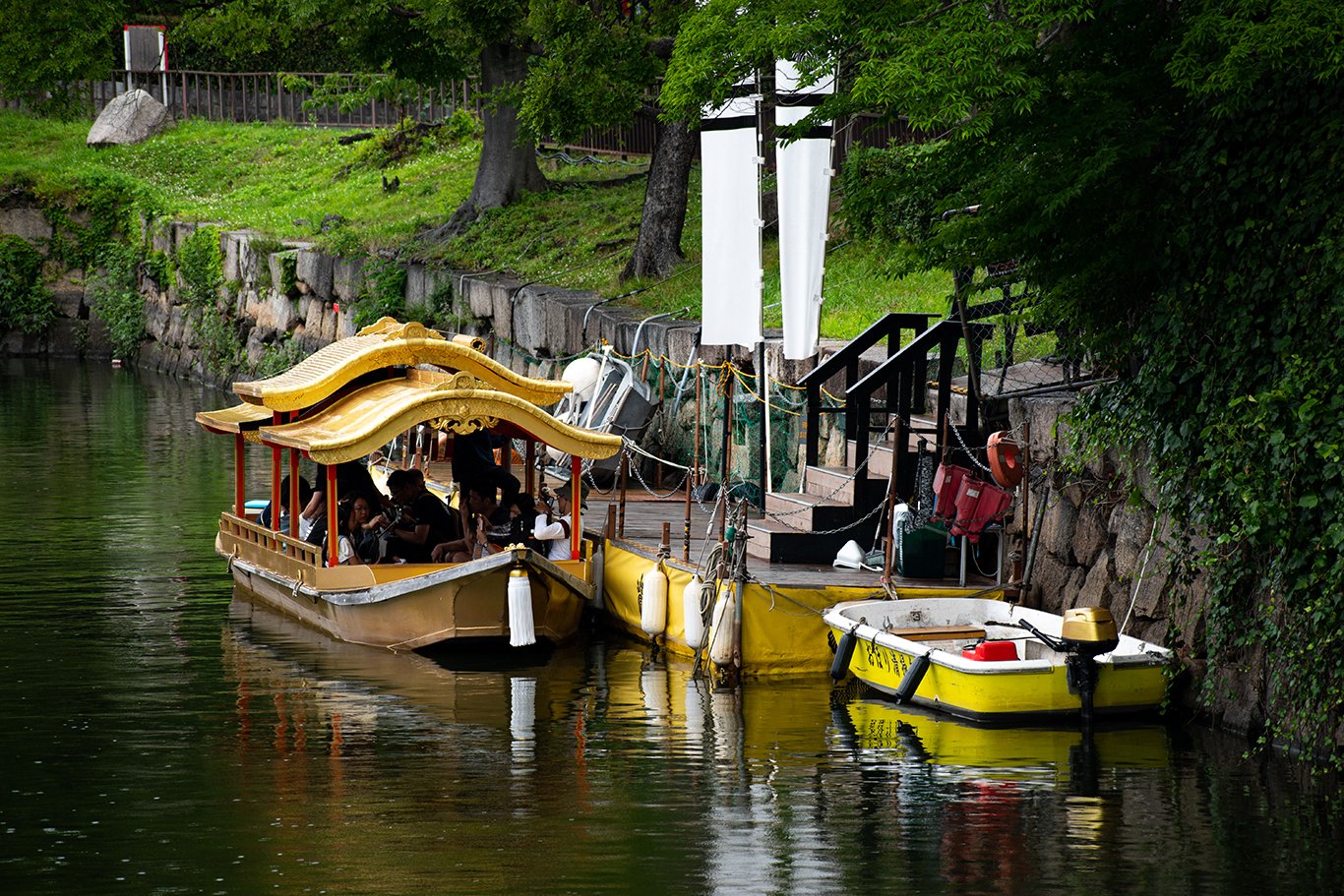