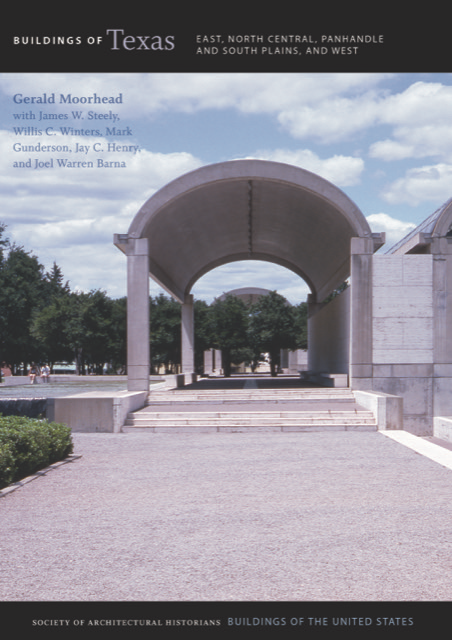 The Society of Architectural Historians has just released the Buildings of Texas: East, North Central, Panhandle and South Plains, and West, which is part of their Buildings of the United

The Society of Architectural Historians has just released the Buildings of Texas: East, North Central, Panhandle and South Plains, and West, which is part of their Buildings of the United States series and the second volume for Texas.

From Dallas–Fort Worth to El Paso, Goodnight to Marfa to Langtry, and scores of places in between, the second of two towering volumes assembled by Gerald Moorhead and a team of dedicated authors offers readers a definitive guide to the architecture of the Lone Star State. Canvassing Spanish and Mexican buildings in the south and southwest and the influence of Anglo- and African American styles in the east and north, the book serves both as an accessible architectural and cultural history and a practical guide. More than 1,000 building entries survey the most important and representative examples of forts, courthouses, houses, churches, commercial buildings, and works by internationally renowned artists and architects, from the Kimbell Art Museum’s Louis Kahn Building to Donald Judd’s art installations at La Mansana de Chinati/The Block. Brief essays highlight such topics as the history and construction of federal forts, the growth and spread of Harvey House restaurants, and the birth of Conrad Hilton’s hotel empire. Enlivened by 350 illustrations and 45 maps, it is a compelling journey filled with countless discoveries.

Join us as we hear from the contributors about their work and the important architecture of North Texas chosen for the book. A reception will be held in the Hall of State at 6:00 with the book lecture at 6:30. Presenting will be Gerald Moorhead, Willis C. Winters, Mark Gunderson and Anna Mod. Books will be available for purchase and the contributors will sign them at the event. REGISTER HERE.