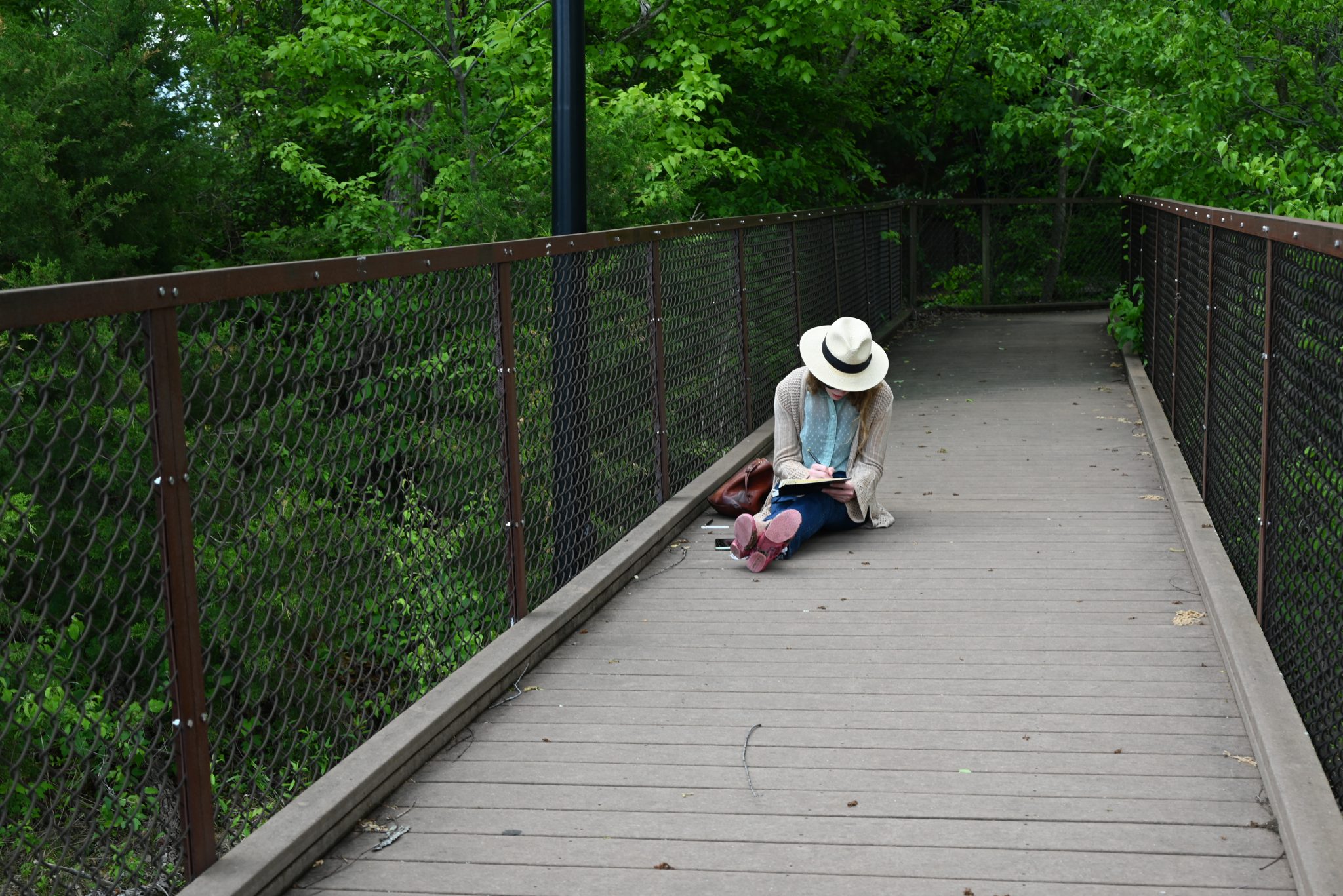 These family-friendly events are perfect for every level of experience, from beginners to experts at sketching. You can join us on Saturdays from March until June at various landmarks around the city.
REJ_0832
IG_REJ_0869
REJ_0843
REJ_0852
View Gallery

On Saturday, April 24th, our sketching group met at the Trinity River Audubon Center. Each found a location along it’s trails to study and draw the building, designed by 2006 AIA Gold Medalist architect Antoine Predock.

The Center resembles a bird in flight, with complex curves and cantilevers that project from the ground into the sky. Our sketchers captured both the building and beautiful landscape dotted by wildflowers that it occupies. Now a natural destination for Dallasites to enjoy and escape the city, the Center’s history is one of overcoming decades of environmental injustice in the area.

Trinity River Audubon Center, located ten miles south of downtown Dallas, is a gateway to the 6,000-acre Great Trinity Forest. As the largest urban hardwood forest in the United States, this forest supports a diverse community of plant and animal species and contains a unique mixture of bottomland hardwoods, wetlands and grasslands. A part of the City of Dallas-Trinity River Corridor Project, the center’s 120 acres sit on a former illegal dump site.

Opened in 2008, the Trinity River Audubon Center is one of the National Audubon Society’s flagship environmental education centers in the Central Flyway.

The center itself, designed by 2006 AIA Gold Medalist architect Antoine Predock, is the first LEED-certified building constructed by the City of Dallas Park and Recreation Department. Its green features include a vegetated roof, rainwater collection system, energy efficient systems, and recycled materials.

The Trinity River Audubon Center is adjacent to a middle-class African-American neighborhood. For a quarter century, the City of Dallas turned a blind eye to over two million cubic yards of trash being dumped illegally in that area. In the 1990s the dump caught fire for two months, making headlines but did not result in any action despite the health and environmental hazards it created.

Deepwood resident Harold Cox, and a group of neighbors sued the City of Dallas. Cox v. City of Dallas, Texas was a precedent setting case that resulted in the reclamation of land and environmental justice.

United States District Judge Barefoot Sanders, Northern District of Texas, found the City of Dallas liable for creating and maintaining this illegal solid waste landfill next to a middle class, Black neighborhood in southern Dallas. Judge Sanders supervised the remedial proceedings and is given the major part of the credit for turning this hazardous site into the current Trinity River Audubon Center of Dallas.

Illegal Dumping Along The Trinity River

The Trinity River has been a site for industrial development for over a century, since it was moved and channeled next to downtown Dallas following a historic flood in 1908.

For decades the river has become increasingly contaminated by pollutants such as urban and agricultural runoff, illegal dumping, and litter.

7.5 million people in the Dallas-Fort Worth metroplex depend on the Trinity River water supply for domestic, industrial, and agricultural use. The downstream population of 6 million people, including the city of Houston, depend on this water source and are directly impacted by the actions of upstream users.

Cadillac Heights. Cadillac Heights is a small enclave south of downtown Dallas, situated close to the Trinity River. The neighborhood floods frequently, evidenced by water lines on the bases of homes. For years, two lead smelters operated in Cadillac Heights. One, Dixie Metals, remained in operation until 1990. It’s now a mounded landfill with a chain-link perimeter fence. The other smelter closed in 1978, but remnants of it remain standing.

West Dallas. From the 1930s to 1984, RSR Corporation operated a lead car-battery smelter in West Dallas. In the 1990s, after a congressional investigation and years of protests, the EPA declared the 13.6-mile swath of land surrounding the abandoned smelter a superfund site and dug out lead contaminated soil from 431 homes.

Floral Farms. In 2019, Floral Farms resident, Marsha Jackson, initiated her neighborhood’s efforts in fighting industrial development, illegal dumping, and other activity in the area. An overflowing hazardous waste site next to Mrs. Jackson’s home, dubbed Shingle Mountain, towered over her backyard before it was removed in 2020 after months of effort to have the issue acknowledged, and over a year of waiting for it to be removed.

Visit on your own or view on Google street view to create your sketch (Google Map Location: https://goo.gl/maps/MugnH2sSwsGe2NkK7) After you complete your drawing, share in our virtual “throw down” using the hashtag #ArchKScope.