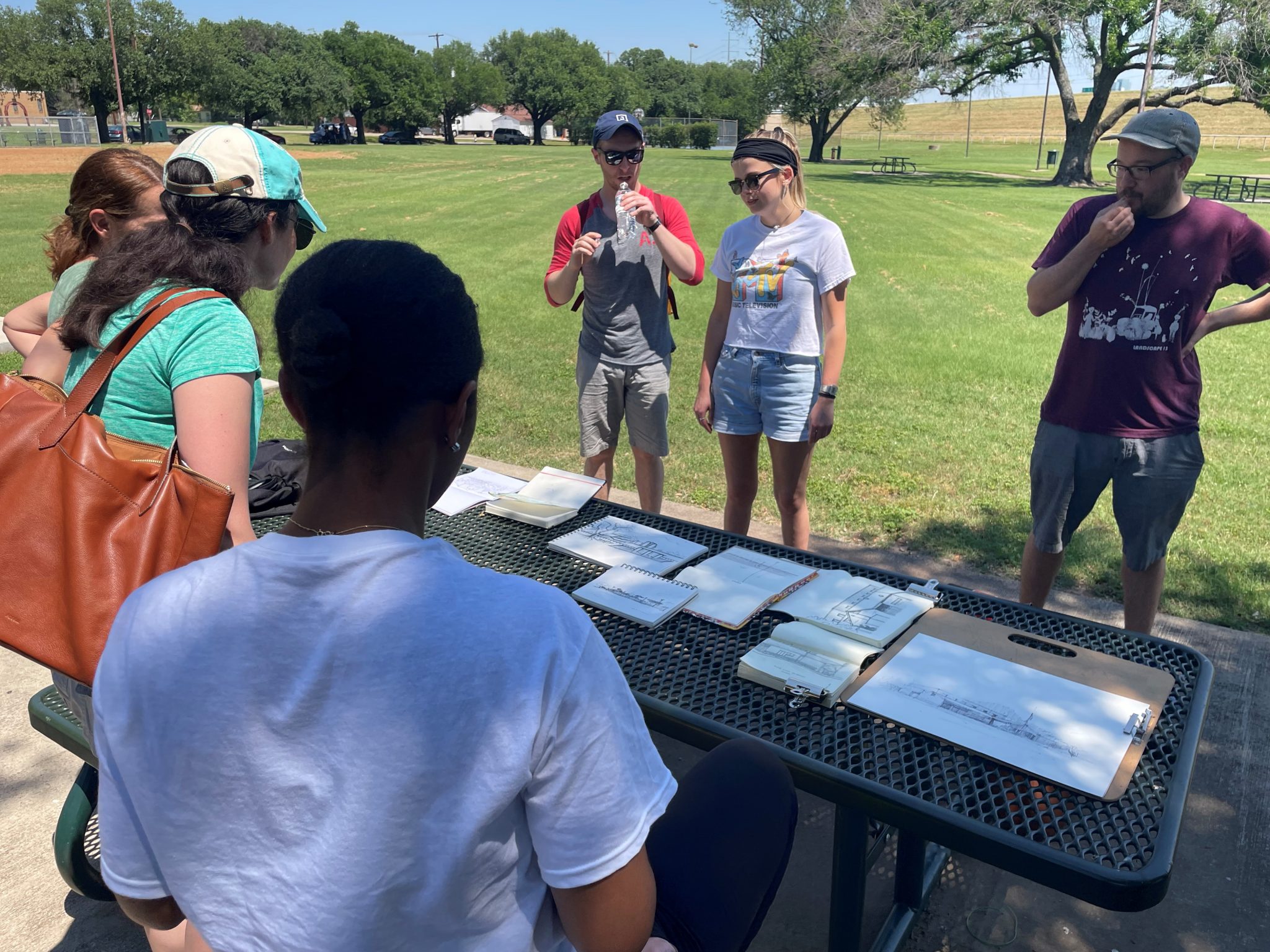 These family-friendly events are perfect for every level of experience, from beginners to experts at sketching. You can join us on Saturdays from March until June at various landmarks around the city.
IMG_0498
IMG_0498
IMG_0492
IMG_0499
IMG_0516
View Gallery

Eloise Lundy Recreation Center is south of downtown Dallas, off Interstate 35E and Colorado Avenue, within a beautiful park with athletic fields, basketball courts, and a playground. The recreation center was named in honor of Eloise Lundy, a Black trailblazer and longtime employee of the Dallas Park and Recreation Department. Lundy, a Dallas native, served as district supervisor of 45 city parks and remained an active presence at the recreation center until her death at age 90 in 1999.

At the beginning of the 20th century, parks, city planning, and beautification were important topics of conversation. At the same time, Black residents found their access to city parks becoming more restricted and petitioned the city for a place where their children could play safely.

Although the city never made racial segregation official, segregation was so ingrained in the city’s culture that it didn’t require an ordinance. While the creation of the parks could be viewed as a victory for the Black community, it was simultaneously a reminder of the divide that persisted in the city and evidence of the all-white patriarchy’s attempted resolution to the city’s race relations.

The park board answered appeals from Black communities in 1915 by allocating the last funds from the 1913 bond election for a “Negro park” east and west of the river.

Between 1915 and 1953, the city of Dallas designated nine parks as “Negro Parks.” Eight of these parks still exist under different names. The park near Eloise Lundy Recreation Center, originally called Oak Cliff Negro Park, was one of the first two parks opened in 1915 in the Trinity River bottoms to accommodate Dallas’ growing Black population.

This lively green space served as a gathering spot for baseball games, May Day pageants, band concerts, and more in its early years. Children would spend long summer days enjoying the space, sometimes only breaking for a snack from the fruit trees that peppered the community.

The “Negro parks” were desegregated in 1955, when the U.S. Supreme Court made several rulings striking down the segregation of public facilities. In 1987, the Oak Cliff Negro Park, by then reduced in size from the construction of the Trinity River levees, was renamed for Lundy. Today, with its athletic and fitness facilities, meeting rooms, and programs for children and seniors, Eloise Lundy Recreation Center is a vital center of activity in the area.

Before the levees were constructed, floodwaters often swamped the modest wood-frame homes surrounding the park later named for Lundy. In the close-knit neighborhood, residents took care of one another when the river overran its banks. T-Bone Walker, born Erin Thibodeaux in The Bottoms, made his 1929 debut recording, “Trinity River Blues,” about the regular, often devastating flooding that occurred before the levees were built in 1931.

Adjacent to The Bottoms and farther from the Trinity River is the Tenth Street Historic District, one of the few intact freedman’s towns in the nation. Designated a historic district by the city in 1993 and placed on the National Register of Historic Places in 1994, the area contains structures built from the late 19th century to the early 20th century. Nevertheless, many buildings have been lost to demolition. Still, the district is significant in Dallas history, with this small neighborhood standing as a testament to the courageous activism of early Dallas residents in the face of opposition.