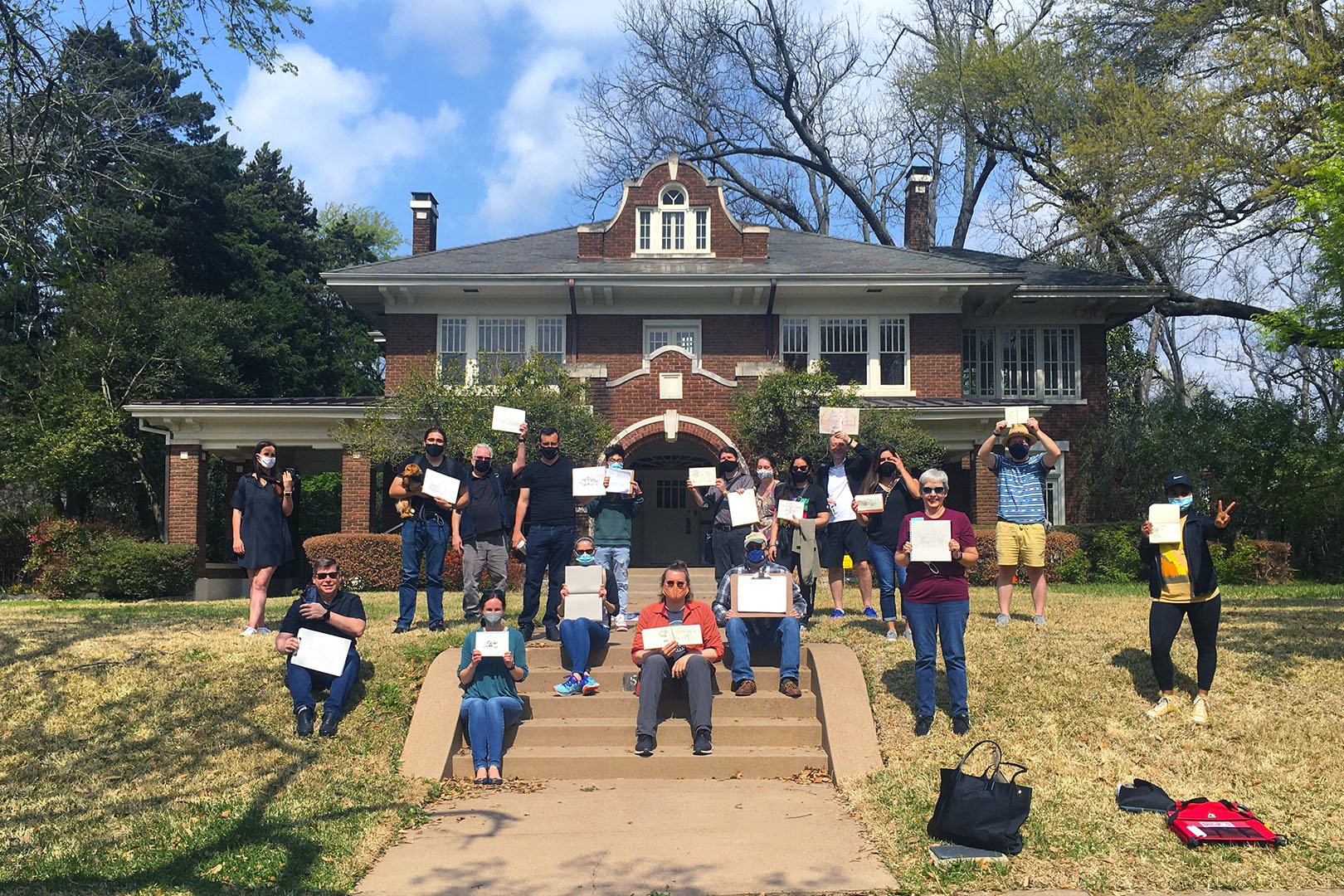 On Saturday, March 27th a small group arrived on Swiss Avenue, sketch books in hand, to learn about Virginia Savage McAlester, Hon. AIA – her work, her legacy, and the neighborhood she both lived in and fought for. After a brief introduction to the area and conversation, they sought out various vantage points and silently focused on sketching the Savage home.

After two hours of sketching, the group shared their work in a “throw down,” placing their open sketchbooks on the stairs that led up to the front of the home. Interesting compositions, viewpoints, and methods were called out as we learned from our peers about what they were able to see and how they illustrated the same subject. 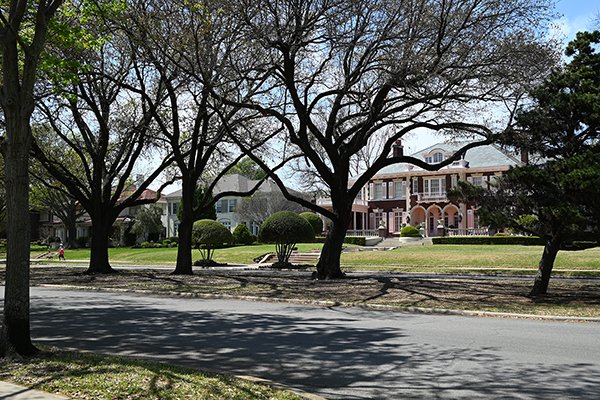 Swiss Avenue is Dallas’ first historic district. Originally developed in 1905 by Robert S. Munger, a successful cotton-gin manufacturer and forward-thinking real-estate developer from an influential Dallas family. His development, Munger Place, was the first deed-restricted neighborhood in Texas, and an exclusive enclave of grand and stately homes along Swiss Avenue, stretching from Fitzhugh Avenue at the east, to La Vista Drive at the west.

Residents enjoyed personal street cars on the Swiss Avenue Trolley. The trolley provided residents with convenient transportation to the downtown business and shopping districts, allowing residents to board at the rear of their homes and travel to any place the rails could transport them.

The area fell into disrepair in the 1960s and 1970s, with the City of Dallas and private developers slating many homes in the area for demolition and redevelopment. One of those proposed development was a high-rise building to be located on Swiss and Carroll. This development was challenged by a small neighbor-led group who ultimately succeeded in getting the area designated as a historic district in 1973. 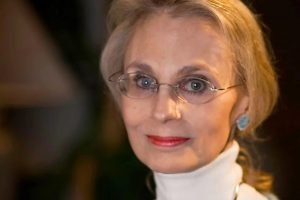 Virginia McAlester, Hon. AIA (May 13, 1943 – April 9, 2020) was a noted author and champion of historic preservation. Raised in Dallas, as the daughter of Dallas Mayor, Wallace Savage and preservationist, Dorothy Savage, Virginia has been a champion of the built environment for over fifty years.

Her efforts in the 1970s to protect Dallas’ Munger Place neighborhood created a model for preservation and inner-city investment that is replicated nationwide.

Her first major work was A Field Guide to American Houses (1984), a book that breaks down each American house style in a clear, concise manner suitable for amateurs, students, and professionals. It has become a standard text on American home-architecture and remains widely considered the first and best such book.

Her other books include: Great American Houses and their Architectural Styles; A Field Guide to America’s Historic Neighborhoods and Museum Houses: The Western States; and Homes of Park Cities, Dallas: Great American Suburbs.

Virginia was a Member of the Dallas Landmark Commission since 1973 and Chair of the Historic Dallas Fund from 1977 – 1980. In 1984, she formed an advocacy group called Friends of Fair Park that successfully petitioned to protect and preserve the permanent buildings in Fair Park, the Dallas site of the Texas State Fair and Cotton Bowl. These buildings, originally constructed for the 1936 Texas Centennial Exposition, remain one of the largest collections of Art Deco architecture, art and sculpture in the world.

“From her seminal A Field Guide to American Houses, to her tireless work and leadership in Dallas and Fair Park, Virginia united Americans behind our movement with a common language and cause for the places that tell their story and make their neighborhoods feel more like home.”
– The National Trust for Historic Preservation

You can contribute to the following tributes to Virginia:

These family-friendly events are perfect for every level of experience, from beginners to experts at sketching. You can join us on Saturdays from March until June at various landmarks around the city and submit your sketch to be exhibited at the final event on June 19.

Save the dates and check back soon for more details on our April event!

Visit on your own or view on Google street view to create your sketch (Google Map Location: https://goo.gl/maps/WZt88fQW7XVPcvpP7) After you complete your drawing, share in our virtual “throw down” using the hashtag #archkscope.